By: Alin Gharibian
Under: Uncategorised
No Comments
21
Apr
2015

WHAT YOU DIDN’T KNOW ABOUT SUNSCREEN

Sunscreen is one of the most important tools we have to preserve our youthful skin. Although your parent’s may have claimed ignorance in their youth and used oil and aluminum boards to achieve the best dark tans, the damaging effects of the sun and the creation of sun screen are concepts that have been around for a very long time. The history of sunscreen goes way back – all the way back to Ancient Egypt.

The Ancient Egyptians were one of the most advanced civilizations when it came to beauty regimes. This early civilization saw beauty in luminous light skin over dark sun-tanned skin and would use plant products to help block the ultraviolet (UV) light and ward off sun damage. Scientists have discovered some of the ingredients in their sun block formulas after translating papyri and tomb walls, and it turns out that some of the ingredients are still used today. For example rice bran extracts, which contains gamma oryzanol, a UV-absorbing ingredient; Jasmine, which has been shown to heal DNA at the cellular level and mend skin damage; and Lupine extract which is used to lighten the skin.

The Discovery of the Cause of Sunburn

Scientists originally thought that sunburn was caused by heat damage until the 19th and 20th century. In 1801, German scientist, Johann Wilhelm Ritter discovered Ulraviolet (UV) rays after experimenting with the effects of light on paper strips dipped in chloride solution and exposed to sunlight. What lay below the visible blue light lead to his discovery of the ultraviolet spectrum, which he called “infraviolet”.

In 1820, Everard Home, an Englishman, hypothesized why darker skinned people in hot climates were better protected than white skinned people, even though black absorbed more heat. He experimented with sun exposure to his hands by covering one hand with a black cloth and leaving his other hand exposed. He concluded that the melanin in darker skin absorbed heat and protected skin.

In 1922, Karl Eilham Hausser and Wilhelm Vahle reported that sunburn could be avoided by protecting the skin from certain wavelengths of the ultraviolet spectrum. They introduced the first commercially available sunscreen to the United States made from PABA benzyl salicylate and benzyl cinnamate. Although sunscreen was available it was not widely marketed and therefore not widely used.

Coppertone was popularized in the mid 1940’s. People were confident that Coppertone would protect them from the harmful rays, which resulted in an influx of sunscreen users and sunbathers. The original ingredients helped prevent sunburn, but unfortunately did not protect from sun radiation. With more people spending more time sunbathing, more cases of skin cancer developed.

In 1962 Franz Geiter, an Austrian that had previously produced his own version of sunscreen called Glacier Cream in the 1930’s had re-emerged with a way of measuring a sunscreens protection level from the ultraviolet rays. The Sun Protection Factor otherwise known as SPF became a billion dollar business still used today.

What to Look For When Buying Sunscreen

Photo-aging is mostly caused by UV-A radiation, whereas skin cancer and sun burn is mostly caused by UV-B radiation. For the best sun protection look for broad spectrum sunscreens that block both UV-A and UV-B rays. At NewDermaMed we recommend using Elta MD sunscreens because they contain the highest concentration of micronized zinc oxide available. Zinc oxide is the only ingredient that uniformly blocks UVA and UVB rays. Although Elta MD is one of the most advanced sunscreens on the market, there is really no replacement for limiting total exposure to the sun and avoiding the mid-day hours of intense sunlight. 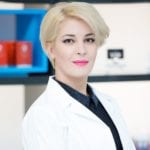 With over fifteen years of experience, Alin has earned her reputation as a highly respected Certificated Medical Aesthetician. Her welcoming personality, strong dedication to her clients continue to support her growth in this field. Alin strongly believes that continuous education and ongoing training is fundamental in offering her clients with the most advanced technologies and innovative treatments. Her annual attendance at world seminars, including the Anti-Aging World Seminars and Management Programs, have kept her at the forefront of the industry’s latest trends and innovative new technologies. View all posts by Alin Gharibian